We had an amazing night of theatre last night from Donal O’Kelly in his award-winning drama, Fionnuala, which lays bare much that is undesirable about Shell’s operations in Ireland, in a rivetting tour de force full of humour and pathos.

His daughter, Katie, performed Donal’s roller coaster tribute to Joyce and the Dublin he left behind in Joyced.

All in all, Sw Frs 7,400 raised for the Edith Wilkins Foundation for Street Children who do fantastic work with hundreds of children in Darjeeling, India, a hub of child trafficking. GLAS thanks everyone who came along. And Chris Black took these great photos. 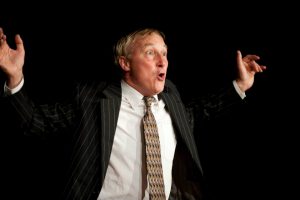 Donal O’Kelly last night on the Geneva stage in the role of Ambrose Keogh in the award winning Fionnuala, a great piece of theatre about the Shell Corrib gas project. Photo: Chris Black 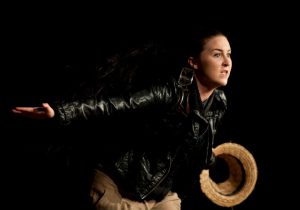 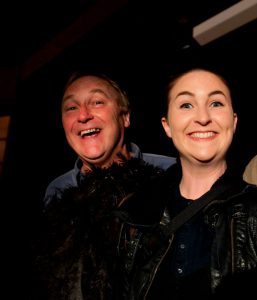 Last night in Geneva was the first time that the theatrical O’Kellys, father and daughter, Donal and Katie appeared on the same bill. They were only brilliant. Photo: Chris Black

A full house says it all….SwFrs 7,400 raised for the Edith Wilkins Foundation for Street Children through last night’s GLAS event in event featuring Donal and Katie O”Kelly in Joyced and Fionnuala.