Another great night – and a standing ovation – in the annals of GLAS. Among the many newcomers, the renowned opera singer, musician, polyglot, polymath, Kirsti Griffiths, attended her first GLAS event last night, Fishamble’s Little Thing, Big Thing which was a sell-out and raised CHF4,500 for the Edith Wilkins Foundation for Street Children.

Kirsti is pictured here with the writer and star of the show Donal O’Kelly in Charly O’Neill’s, proud sponsors of the GLAS raffle. Donal is also seen on stage with the fabulous Sorcha Fox, his co-star. We staged the production in the Lutheran Evangelical Church, bin-liners on the windows and lighting in the loft.

All the effort was worthwhile. In addition to looking after some 600 children, the Edith Wilkins crew are on a mission to the border with Nepal distributing relief and looking out for the interests of children orphaned or separated from their families. Unfortunately, child traffickers flourish in the kind of chaos which ensues after a major disaster like the Nepal earthquake which has killed thousands and affected millions.

Big shout out to Jim Culleton who directed the piece but could not make it to Geneva. Thanks everyone for coming and thank you all for spreading the word. We had a full house with no publicity. 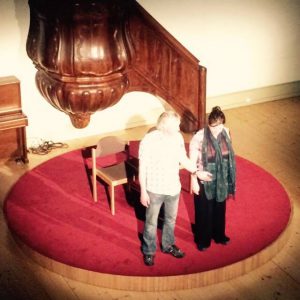 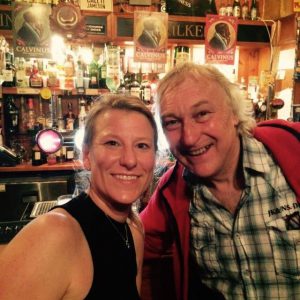