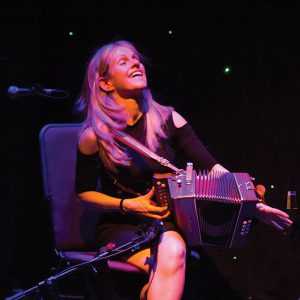 Sharon Shannon has music at her fingertips….literally! The accordionist from Ireland has achieved legendary status throughout the world and has made the much-maligned accordion ‘cool’ in her home country. She is renowned for her collaborations, not just in Irish traditional music, but through all musical genres, hip-hop, cajun, country, classical and rap.

The Geneva Literary Aid Society is proud to bring Sharon Shannon and her band to Geneva for the first time. She will play in the magnificent surroundings of the Centre des Arts at Ecolint’s La Grande Boissière campus, just outside Geneva city centre (four tram stops from Rive) on Friday 24 November 2017 at 19:30.

All proceeds from the concert will go to the Edith Wilkins Foundation for Street Children in Darjeeling, India.

Sharon Shannon has recorded and toured with a who’s who of the Irish and global music industries, including Bono, Adam Clayton, Sinead O’Connor, Jackson Browne, John Prine, Steve Earle, the RTÉ Concert Orchestra, The Chieftains, The Waterboys, Willie Nelson, Nigel Kennedy, Alison Krauss and Shane MacGowan – a list that is testament to Sharon’s versatility as well as her talent. She has also entertained US Presidents: Clinton at the White House and Obama in Dublin; and Irish Presidents Robinson and MacAleese on presidential visits to Poland and Australia respectively.

The genre-defying star has had multi-platinum album sales and has had several number one albums, singles and DVDs in her home country. Her album Galway Girl went four times platinum in Ireland with the title track winning her the Meteor award two years running for most downloaded song.