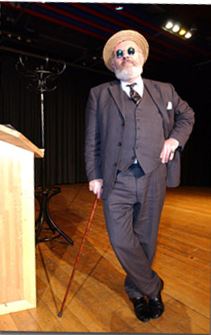 Over 200 people braved the cold winter night on January 27 to take their seats in the theatre at the College de Coudrier to hear the well-known Joycean scholar David Norris’ give his tour de force performance based on the life and work of James Joyce, “Do You Hear What I’m Seeing?”.

They had gathered to launch the Geneva Literary Aid Society which has the twofold aim of supporting the arts and supporting people living with HIV/AIDS. The event was staged with the wholehearted support of the Geneva Irish Association (GIA).

The audience frequently erupted in laughter and was held spellbound for two hours as Norris hurtled his way through the Joyce canon with hardly a pause for breath. He managed to bring Joyce alive in a way that few can, through a wonderful evocation of the writer’s humour and humanity.

Senator David Norris who is better known in Geneva for his visits to attend the UN Human Rights Commission received a rapturous and well-deserved standing ovation at the end of his performance.

He was welcomed to Geneva the previous night at a reception for Irish people working in international organisations, hosted by Ambassador Mary Whelan at her residence.

Senator Norris remained on stage to assist GIA President, Finola Keating, and GLAS founder, Denis McClean, to draw the winning tickets in the raffle for several prizes which included bottles of Joyce’s favourite whiskey, Jameson, and elegant volumes of Joyce-related literature including the 1922 annotated text of Ulysses and a copy of Finnegans Work (“no home should be without one” according to McClean).

All in all it was a memorable night and CHF 6,000 has been given to Bernard Gardiner who manages the Masambo Fund at the International Federation of Red Cross and Red Crescent Societies. The fund provides life-saving care and treatment for Red Cross and Red Crescent volunteers who are themselves living with the virus while also trying to assist others in similar circumstances in poor communities across the developing world.

A total of CHF 7,100 was raised on the night and the reserves are being used to meet operating expenses incurred and to prepare for the next GLAS event, details of which will be announced shortly. Le Richemond Hotel provided accommodation for Senator Norris and the event was well-supported also by Jennifer Clickner’s drive-time show on WRG which ran an interview with the Senator and also mentioned the event on several occasions.